Fear – It’s Nothing To Be Afraid Of

I hold each of you in prayer as I know, like me, you are having a challenging time right now with the events happening in our state and states across the country. My heart aches because of it. We are being thrown further into questions that are essential for us to examine and emotions that need to be felt.

In times of uncertainty, our minds can easily go directly to fear, despair, anger, and worry. I know because I am no stranger to this… I wrestle with it as well.

The Board of Trustees and I realize we need a forum for processing all that is happening. We are inviting you to a Zoom event where we can share our feelings and support healing and together find creative ways to take action for justice through educating, serving, and creating community that will not only serve us but serve the greater community. We have set Sunday evening, June 7, at 7 – 8:30 for this Conscious Love Gathering.

In the talk series I am doing on Sundays from the book What is in the Way IS the Way by Mary O’Malley, this week was on “Fear – It’s Nothing to be Afraid Of.” I am going to only give you a snippet from the talk because I want you to read a first-hand account of turning and facing the fear.

In other words, your life is for you – no matter what is happening! This is the truth.

With Rev Elizabeth Peterson’s permission, I am posting her account of being at the protest in Portland on Monday afternoon:

I have not spoken nor posted very much about the murder of George Floyd. My heart has been breaking but, as a white person, I did not feel ok about offering… well, anything except love. I have been in almost constant prayer. Sending love to ANYONE and EVERYONE but not publicly doing much on Facebook or elsewhere.

I had this talk with God that if I was to do more, then SHOW ME! If that meant going to Minneapolis, then I would go. I made a decision yesterday. Even with the threat of the coronavirus and also a broken toe, I decided to go to the protest in Portland, Maine. Interestingly enough, I had GREAT DIFFICULTY finding out any information about it. I have gone to some protests and have ALWAYS been able to find out information and to find it easily. But not for this. Jordan saw a post on Instagram and that is how we found out where to go.

I can’t write all of the details of the event, as it is too overwhelming. I can’t even really put into words how this felt, so I just want to highlight some aspects.

I have no idea how many people were there, but it was A LOT. The organizers said it was the biggest crowd they have had, and this was the third day of protests. 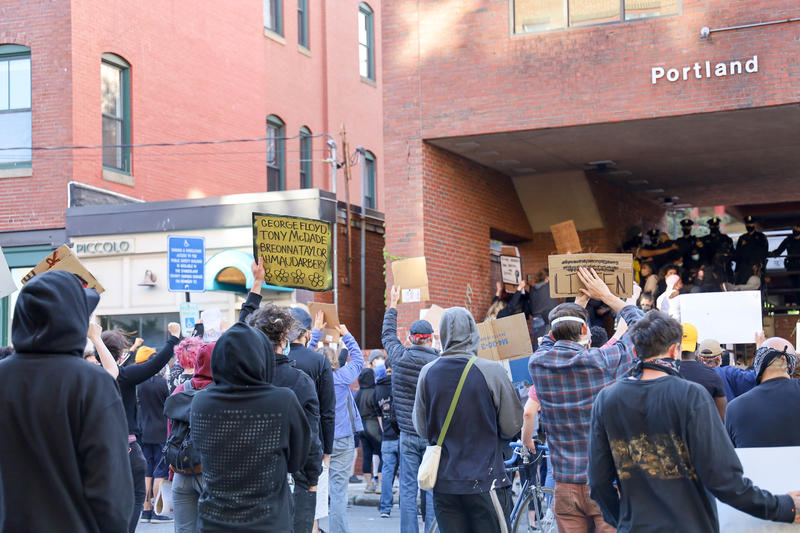 At a rally in Portland Sunday, protesters of George Floyd’s death gather on the steps of the Portland Police Department..
CAITLIN TROUTMAN / MAINE PUBLIC

A police officer came over to the group before it started and noted that the police were there to protect us. He introduced himself. He noted that he totally believed in what we were doing and wanted to make sure that everyone was safe! After he finished talking and went back across the street, I went over to talk to him. I thanked him for doing his job and how I am sure that isn’t easy right now. I told him that I do not believe that ALL police officers are bad. He thanked me for coming to talk to him and again stated how he felt that what we were doing was a great thing and it was his job to make sure everyone was safe. He was white and I am white. Would it have been different if I was black?

We started walking and chanting slogans such as Black Lives Matter, Say his name George Floyd, I can’t breathe. And, it felt amazing to be walking side by side with black people and white people peacefully.

We get to the Portland Police Station where they have tried to put up a memorial for George Floyd, but it keeps being taken down. One of the organizers said that we will be there every day to put it back up again. Then she told us to lay down on our stomachs. There were people as far as I could see. Not much for social distancing but I believe everyone had a mask on. So, down on our stomachs we go. People were laying partially on me…. and on my broken toe. So, I was in pain. I laid there on my stomach with my head down. I was there of my own free will as part of a peaceful protest and the image of George Floyd being detained AGAINST HIS WILL with a police officer with his knee on his neck overwhelmed me.

I burst into tears and just sobbed for George and for ALL THE BLACK LIVES that have been lost due to hatred. I smelled the concrete. I felt the pain of my broken toe. The closeness of people who could be carrying the coronavirus… AND I WAS MAKING THE CHOICE to be there. NO ONE was forcing me.

Again…I SOBBED. It felt like an eternity that we lay there. People started to get up. The organizer then told us to go home and do it again as we hadn’t even been there for 9 minutes. WHAT???!!!!! OH MY GOD! The fear, the pain, all of it… and we didn’t even last for the whole 9 minutes. And at any time I could get up and walk away!

Then we walked to City Hall. On the way there, people start running off to the right and there was a police car with its lights on. People started kicking the car and yelling at the officers. None of the organizers were there. The officers sat in their cars. It felt like “some” of the protesters WANTED to start violence. I stood there praying and holding love for all.

At City Hall, the organizers spoke again. A young black woman noted how great it was for white people to be there. She also noted that when it was all over, we white folks would go home. She would go home and still be black. She would wake up and still be black. We white people can do our nice little thing… and then walk away. She also stated how someone at work THAT VERY DAY had asked her if her hair was real????!!!!!!!!! That is something I have never had to deal with. NONE OF THIS HAVE I EVER HAD TO DEAL WITH. As I stood throughout this whole event, I just kept being reminded of how privileged I am and always have been without even giving it a second thought.

We walked back to the police station. Chanting slogans: No Justice No Peace. No Racist Police. Say his name George Floyd. Black Lives Matter. What does democracy look like… THIS IS WHAT DEMOCRACY LOOKS LIKE!

Back at the police station, the memorial was still there… for now. The organizers spoke some more and then asked people to PEACEFULLY go home. We had been there about 2.5 hours I think. We started to walk away. There was a police car with its light flashing. People were making a white wall. Most people were there peacefully but again there were just a few… and they were white that seemed like they wanted to incite violence. They were right in the officers’ faces screaming things like “You #@#%+@# coward.” No need of that. So, again I prayed and held LOVE, LOVE, LOVE for all. The protestors kept asking the officers to please kneel to show their solidarity. An older officer did kneel, and the crowd erupted in cheers. I talked to one of the other officers and thanked him for doing his job and how his job right now cannot be easy. He told me that he 100 percent believes in and agrees with the protestors AND… his job is to make sure EVERYONE is safe. I know that not ALL officers/people believe this because if they did, we would not need to be here.

As we were leaving again, a huge truck was stopped in the middle of the road and people started swearing and throwing water bottles at the truck. Jordan went running to the truck. One of the organizers asked the white people to form a wall so that no one could get closer to the truck and that hopefully that would help people to calm down so the police did not need to take further action. On her bullhorn organizer walked around the truck pleading with people to quit recording this and GO HOME! Praying was I and eventually the crowd did disperse at least where we were.

Bottom line for me. This hatred HAS TO STOP! HAS TO. I have not realized… and really I still don’t… how privileged my life has been just because I was born with a lighter skin tone. This sickens me. I also realized last night that I will NEVER EVER KNOW the fear that black people live with ALL THE TIME.

I do not understand how people can hate another person because of the color of their skin and I will NEVER EVER understand that. Thank you God!

What as my privileged white self can I do? I can continue to be there. Speaking Up. Standing Up. Letting everyone know THIS IS NOT OK. I, as a white person, stand with ALL PEOPLE of COLOR……THIS IS NOT #@%^&@# OK.

I pray. I LOVE. I stand in peace and will continue to do so as long as I am able.

Thank you, Elizabeth for letting this be published.

If you are having a birthday in June, I have a gift for you. It is meeting with me and completing an Annual Spiritual Checkup. We can do this by using Zoom, Skype or telephone. Let me know when your birthday is and that you would like to schedule a time to receive your gift. You can contact me here.

For your safety, continue to social distance and wear face masks. The church building remains closed for gatherings of all services and group meetings. All business with the church office needs to be via telephone or email.