Letters from Prison: The Language of Resistance

I often use this writing to highlight someone in the congregation that we have reason to celebrate or be grateful to for their good works. This week is no different. This week I want to celebrate and be grateful for all of you who have been and continue to support and be connected to Unity Center for Spiritual Growth. Every Sunday it brings me great joy to read the comments in the chat box and to see who is joining us. Although we would love to meet in person, this is the best we have for right now. So thank you for staying the course with us and for your financial contributions. We look forward to being together soon!

This past Sunday we hosted Susan Stein, well known for her work with Etty Hillesum, the Dutch author of letters and diaries describing her religious awakening and persecutions of the Jewish people during the German occupation.

Susan masterfully gave a glimpse into Etty’s letters and Martin Luther King’s letter from the Birmingham jail. Her ability to bring both of these individuals alive during her message was mesmerizing. I don’t think I was the only one left spellbound when she finished. 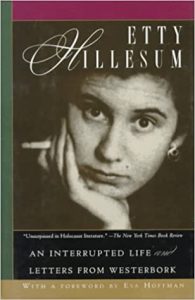 Susan joined us for Coffee Hour, and the energy was such that it was decided to have the workshop. She gave us this letter to read and pick out phrases that stood out for us and we each read a phrase without any discussion or interruption and we created a mosaic for us to hold this in. Here is the letter from Etty Hillesum, An Interrupted Life and Letters from Westerbork. The diary is from 1941 – 1943 and the letters begin in November of 1942.

Not much health is left now inside the barbed wire; more barracks are always being added. Only a little piece remains in the farthest corner of the camp, and that’s where I’m sitting now, in the sun under a glorious blue sky, among some low shrubbery. Right across from me only a few meters away, a blue uniform with a helmet stands in the watchtower. A guard with an enraptured expression is picking purple lupins, his gun dangling on his back. When I look to the left, I see billowing white smoke and hear the puffing of a locomotive. The people have already been loaded onto the freight cars; the doors are closed. There are many green police, who sang this morning as they marched by the side of the train, and the Dutch military police are out as well. The quota of people who must go is not yet filled. Just now I met the matron of the orphanage, carrying a small child in her arms who also has to go, alone. And a number of people have been taken out of the hospital barracks. They are doing a thorough job here today; big shots from the Hague have come on a visit. It’s very strange watching these gentlemen at work from close quarters. I’ve been up since four this morning dealing with the babies and carrying luggage. In a few hours you can accumulate enough gloom here to last a lifetime. The nature-loving policeman has gathered his purple bouquet now, perhaps he’s off to court some farmer’s daughter in the neighborhood. The engine gives a piercing shriek. The whole camp holds its breath; another three thousand Jews are about to leave. There are babies with pneumonia lying in the freight cars.

Sometimes what goes on here seems totally unread. I haven’t been given any particular job, which suits me very well. I just wander about and find my own work. This morning I had a brief talk with Vught, who told me her latest experiences in three minutes. How much can you really tell in a few minutes? When we came to a door, and I wasn’t allowed to go any further, she embraced me and said, “Thank you for being such a help.”

Just now I climbed up on a box lying among the bushes here to count the freight cars. There were thirty-five, with some second-class cars at the front for the escorts. The freight cars had been completely sealed, but a plank had been left out here and there, and people put their hands through the gaps and waved as if they were drowning.

The sky is full of birds, the purple lupins stand up so regally and peacefully, two little old women have sat down on the box for a chat, the sun is shining on my face – and right before our eyes, mass murder. The whole thing is simply beyond comprehension.

Here is a website that may be of interest to you: classroomwithoutborders.org. Susan will be teaching along with others on March 3.

A new series will begin on Sunday, February 28; it is called Living Originally and is based on the book with the same title, written by Unity minister Robert Brumet.

According to Peter McWilliams, “Nonviolence toward the self is caring for oneself. It is what the Greeks call reverence for the self.” Real caring is not just what we say, but what we do. Make a list of at least five ways you can take better care of yourself. Practice at least one each day this week.

Mother Theresa implored us to “find someone who thinks he is alone and let him know that he is not.” Each day this week, do as Mother Theresa suggests.

Have a great week and stay safe and healthy.