Hallelujah he has risen! The joy of Easter is here! The resurrection has taken place… and what a glorious Easter it was. Here in Maine the weather was beautiful, and the music and service were the finest for a resurrection event.

But what happens next. The 40 days following are as much an event as Easter and yet we tend to get on with our lives. This is a little long but well worth the read. 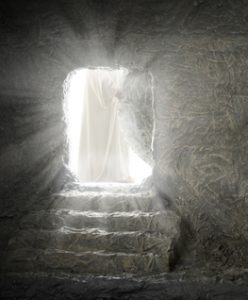 It was during this time that Jesus appears to his disciples on various occasions. The first of course is to Mary Magdalene outside the tomb when she thinks he is the gardener.

What is notable here that Mary is the first who he appears to because in that time women were among the lowest of the low. So he is following his pattern of looking first to the downtrodden.

Then on to the road to Emmaus he comes upon Cleopas and a companion who were conversing with each other about the events they had witnessed. He catches up with them and asks what they were discussing. They respond, “Don’t you know all the things that have occurred?” They go on and tell him all that had happened and Jesus in turn gives them a history lesson; he interpreted to them things pertaining to Himself in all the scriptures. They arrive at their destination and ask Jesus to stay with them as evening was closing in. It was at dinner as he broke the bread and began to hand it to them that “their eyes were fully opened, and they recognized him. And he disappeared. As they looked at each other they said, “Were not our hearts burning as He was speaking to us on the road?”

Then what happened is what we would do… they hurried to where the disciples were and told them what they had experienced. They thought he was a ghost… the doors were locked because they feared being crucified and suddenly Jesus stands in their midst. To verify it is him he shows them his hands and feet. They were filled with joy. They gave him food to eat, and he told them, “These are my words which I spoke to you while I was yet with you, that all the things written in the law of Moses and in the Prophets and Psalms about me must be fulfilled.”

Then eight days later he appears again to them and Thomas is there, which he wasn’t previously, and he is not convinced it is Jesus. He said to Thomas, “Put your finger here, and see My hands, and take your hand and stick it into My side.”

Thomas believed and Jesus instructed them to go and make disciples of all the nations, baptizing them and teaching them to observe all the things that he had commanded of them. He then tells them he will be with them till the end of the world.

His last appearance is at the sea of Tiberias. The disciples have now gone back to their livelihood of fishing. After having fished all night and caught nothing Jesus tells them to cast their nets on the other side of the boat. At that time, they didn’t know it was Jesus but does as he says. The nets are too heavy with fish they couldn’t pull it in. At that moment Peter exclaims, “It is the Lord” and he jumps into the sea and hurries ashore. Jesus prepares them breakfast with the fish. He breaks bread and gave it to them and then the fish.

After 40 days he is lifted up; Luke writes the account in the Book of Acts. He gave them the orders, “Do not withdraw from Jerusalem, but keep waiting for what the Father has promised, about which you heard from me, because John, indeed, baptized with water, but you will be baptized with the Holy Spirit not many days after this.”

“Lord,” they asked, “are You restoring the kingdom to Israel at this time?” He answered, “It is not yours to know the time or season which the Father has placed in His own judgment, but you will receive power when the Holy Spirit arrives upon you, and you will be witnesses of me both in Jerusalem and in all Judea and Samaria and to the most distant parts of the earth.” And after He had said these things, while they watched, He was lifted up and a cloud caught Him up from their vision. And as they were gazing into the sky, two men in white garments stood alongside them, and they said, “Men of Galilee, why do you stand looking into the sky? This Jesus who was received up from you into the sky will come thus in the same manner as you have beheld Him going into the sky.”

This coming Sunday Rev. Matt Purinton will be our guest speaker. Matt is our Board chair, and I am very grateful he is willing to step in for me as I along with Rev. LeRoy will be leading the Silent Retreat at Marie Joseph’s starting on Sunday. It is not too late to join us.

Also, mark your calendar for May 1, Unity Cleanup Day. It is more than cleaning up; it is a way for us to come together in community in a safe way. Masks and social distancing will be in place. If you would be interested in helping inside, please let me know. I will be orchestrating this piece. Oh, did I say we are going to have fun… absolutely!